Producer. MC. Judge. Tally master. Writer. Caterer. Comedian. The only thing Karen Ultra hasn’t done during a leather event is deliver triplets while performing all six roles in the “Cell Block Tango” on stilts. Her skills on a stage have been seen at IML, ABW, Colorado Leather Fest, Iowa Leather Weekend, Mr. Indiana leather, Mr. Houston Leather, and several others she refuses to mention anymore. Her comedy has literally created a 5.5 earthquake, and has been known to offend men, women, marsupials, Sea Monkeys and Muppets. When she’s not busy being a mother to her clone or keeping vampire’s hours for her day job, she can be found around the St. Louis area antique shopping, looking for new pretty boxes to place the hearts she has ordered collected by her huntsmen. 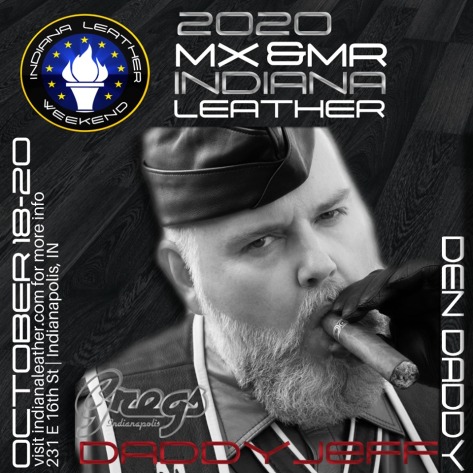 Daddy Jeff stumbled into Leather in 2004.  His super-secret knock password was “Teach me how to hurt you.” He sees Leather through the eyes of a daddy – a chance to help each individual find what makes them special.

A member of Titans of the Midwest, he also works with Tri-State Leather Weekend and is a member of the IML contestant handler team. He is honored to spend his second year working with the Indiana Leather contestants as den staff.  Last but not least, he is Mr. Midwest Leather 2016 and proud to be one of the 66 brothers of the class of IML-IMBB 2017.

Daddy Jeff shares his life with boy Collin, playing xBox, binging Netflix, and trying to find all the things that make the boy squirm and shake.   He is grateful to be part of the Kentucky leather community, a unique and accepting collection of freaks, geeks, and weirdos of all shapes, presentations, and identities.  He believes that we are all better when we #LeatherTogether (yes, that’s a verb).

Pup Havok is a slutty, sex positive St. Bernard who now calls Indianapolis, Indiana home. This boot-licking boofer lives up to his namesake in many different fashions! As a proud “queer-as-fuck switch,” Havok has made quite a name for himself in the leather and kink community since joining in 2012. He is a co-founder of Project Touch Base, a full member of the Titans of the Midwest and the GDI Outlaws, the Director of Emotional Support and Squeaky Toys for House Awkward Turtle, and is the recipient of the 2018 Bear Abbot Community Commitment Award. He can also be described as extremely touchy-feely, given some his favorite kinks. These include heavy impact, knife, fisting,and of course, puppy play. He also enjoys facing the elements with electro and fire play.

He has served proudly as both TriState Puppy 2017 and IPC International Puppy 2019 and currently is enjoying time off settling into Indianapolis. As a community educator, kink enthusiast, feminist, collared puppy, and relationship anarchist, and aspiring Bootblack is certainly a good place to start if you’re looking to wreak some “havoc” of your own! 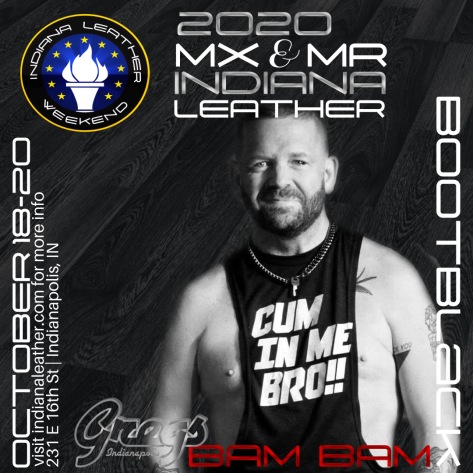 Our Indiana Leather Weekend 2020 bootblack is Bamm-Bamm Leather. Be sure to swing by the bootblack stand this weekend so that he can show your gear some love.
Bamm-Bamm identifies as a switchy sexual opportunist, and bootblacking is no exception. Whether he’s grinding on a pair of Wesco’s at the nearest leather bar, tweeting about his latest exploits as a traveling cumpuppy, or greasing the boots standing on his chest at any given moment, it’s all about the erotic energy exchange. Known for his hyper-sexual Bootblacking style, whether top or bottom, Bamm knows how to ensure everyone in his chair leaves satisfied. Bamm-Bamm is one of very few people to have held two major international leather titles, having won International Leatherboy in 2012 and International Mr. Bootblack 2015.
You can now find him groping every pair of boots in sight whenever he gets the opportunity to bootblack, as well as teaching classes at events around the world and perverting everyone willing along the way. He currently calls Cincinnati home with his husband & fellow IMBB, Pup Pawlish. Bamm is the loving Daddy to his little, Dougie, and Sir to his boy Zachary, and is also celebrating 6 years as the proud handler of the infamous front-walking dog, pup Tugger.